On The Trail of the Glaciers

“On the Trail of the Glaciers” is both a photographic and a scientific project that relies on inputs from specialized photographers and glacier scientists. It combines the comparison of photographic evidence and scientific research as a way of analysing the effects of climate change.  Through a series of expeditions over more than a decade the project is carrying out glaciological measurements and taking photographs of the planet’s most important mountain glaciers from exactly the same viewpoint chosen by the photographer-explorers of the late 19th and early 20th Centuries. Comparison of the archive and present day photographs reveals the extent of the melting of the ice cap, each glacier being a case study that serves to raise awareness of the consequences of climate change.

The scope of the project is to increase the awareness of the public at large of the issues surrounding the phenomenon of climate change. The power of comparative photographic images combined with scientific findings will add to our knowledge of the impact of human activities on the climate and the environment and, consequently, on the quality of our lives. The dissemination of the data gathered by the project will contribute to the advancement of economic policies that are compatible with safeguarding the earth’s resources for future generations.

Climate and environmental changes have given rise to the rapid disintegration of huge glacial masses with environmental consequences which are still not completely understood. Combining documentary and scientific approaches, the project aims to gather unique data on the recent dynamics of glacier movements and on the state of health of test case glaciers in Karakorum, the Caucasus, Alaska, the Andes, the Himalayas and the Alps.

Through an original fusion of innovative scientific research and comparative photography techniques the project aims to contribute to the general public’s understanding of issues such as:

– The importance of sustainable development and the conservation of the world’s natural resources, in particular water resources;
– The importance of biodiversity;
– The role of scientific research in raising awareness and understanding of environmental issues;
– The restoration and safeguarding of photographic archives, recognizing their value as historical and cultural heritage. 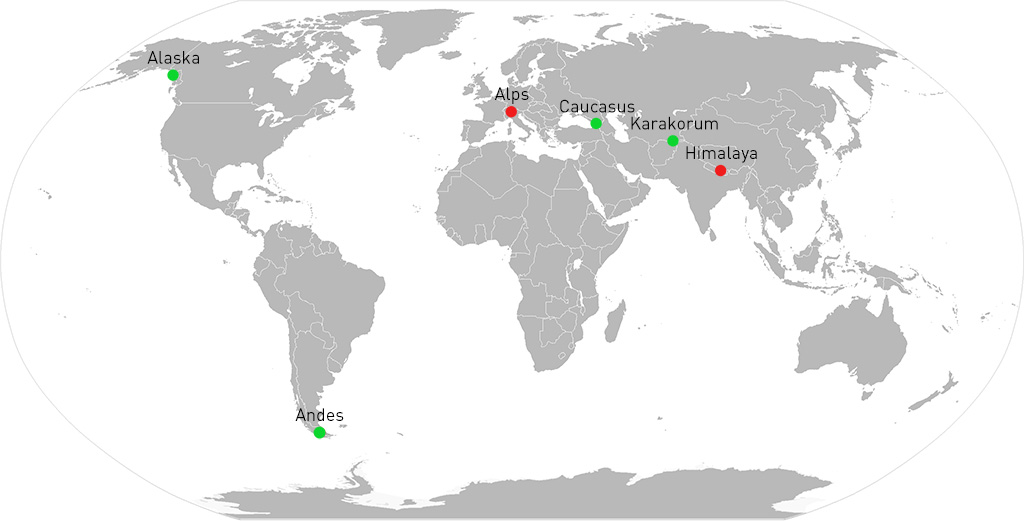 The travelling multimedia exhibition which accompanies the project displays over 60 large-format comparisons of new and archive photographs and includes two interactive video installations with a 4×3 meter screen and modern and vintage camera equipment displayed side by side. The exhibition has been hosted by internationally important museums and institutions such as the Messner Mountain Museum in Firmian (Italy).

Each expedition is filmed by a crew of filmakers for the creation of the documentary series “On the Trail of the Glaciers”. The first two documentaries were produced and distributed by SD Cinematografica and aired by many television broadcasts such as  ZAI, DF, ARTE, RTSI, RAI, NHK. The fourth documentary shot during teh last expedition is currently in post production.

The project is supported by key institutions that share the project’s values, and by private companies that finance not only the field expeditions themselves, but also all the events that showcase the mission’s achievements to the general public.